Maybe it's just Folklore, but Some say the Jean Bonnet's Haunted.

It’s been said there is more to the allure of the Jean Bonnet than its charming atmosphere, historical past, and excellent food and drink. There are stories of hauntings and ghostly encounters.

Indeed some visitors are drawn to the tavern in hopes of having an unearthly encounter themselves. Sightings and odd happenings have been experienced by both employees and guests at the Jean Bonnet.

The following are excerpts from Return to the Haunted Jean Bonnet Tavern published in the The Pennsylvania Ghost Guide, Volume II , written by Patti Wilson.

Perhaps one of the most dramatic sightings occurred years before the present owners, Shannon and Melissa Jacobs, purchased the building. It happened to a female bartender and her male friend.

“One night, the bartender was working when a friend of hers came in. Through the course of the evening, the fellow had too much to drink.

When it came time to close up, she and her male companion were afraid to let the inebriated fellow drive. As the guy lived nearby, they decided to lock up, take the man home, and then return to finish cleaning up. The woman had the keys and knew this would be fine with the owners.

They took the man home and returned to the bar. As they walked along the porch, they glanced in the window of the bar. Sitting there was a solitaire man who was sipping a drink. That was impossible for they had made sure the bar was empty before leaving. Still, the fellow had gotten in somehow.

Quickly, they unlocked the door and hurried into the bar. No one was there, but the building is big, so did the man hear them coming and hide? The two immediately ruled out anyone hiding in the upper levels because they had the key that unlocked the iron grillwork that separated the bar from those floors.

However, someone could have gone down the stairs to the restaurant. They mounted a search but found no one. This upset the woman so much that after duly reporting the events to the owners; she did not often mention the story.”

Employees are not the only ones to experience hauntings. Guests have reported many encounters as well.

“Scott Crownover decided to spend the night at the tavern to see if he would have an encounter. He invited a group of friends and a few members of the Central Pennsylvania Paranormal Association along. The group would not be disappointed.

They rented the attic apartment that was then for let and went down to dinner. Afterwards, they went up to the bar where one of the men felt someone touch him.

While they were discussing that, a woman heard them and came over. She said that the conversation had caught her ear as she had just experienced being touched by someone at the edge of the bar a little earlier. She too insisted that no one was near her.

Later that same evening, another member of the group, Al Brindza, was in the bar watching the activity. Now Al is a confirmed nondrinker, so he felt a bit out of place in the bar. However, he tried to concentrate upon his feelings, despite the loud voices and the piano playing at the other end of the room. Suddenly he glanced at the one doorway that led into the hallway. Looking through the door were a group of people in rough clothes. Al called them “frontier type” clothes.

The group was watching the man playing the piano at the other end. Al described his experience as “like trying to watch two televisions at once.” He was aware of the real people at the bar, but he was equally drawn by those looking in from another time. This lasted a few seconds, but when he looked away and back again, they were gone.”

Of course, new owner, Melissa Jacobs, has had her own experiences in the building.

“Soon after purchasing it (the Jean Bonnet), Melissa began to notice that every time she went past the door to the then un-rented attic apartment, the door would be in a different position. If it was closed when she first passed it, then it would be wide open a few minutes later when she came by again.

One morning she noticed this occurring several times and she decided that someone had gotten into the building somehow and was playing a trick one her.

Melissa went to her office on the tavern second level to await a salesman who was coming in. When the man arrived, Melissa explained the situation to him and asked if he would accompany her on a search of the building. He agreed.

The two went past the apartment that was open as they began searching the bedroom level. A few moments later, they went by again, but it was closed. No one was found in the apartment or on any other level in the building, and the doors were all locked securely from the inside.

The salesman was as baffled by the strange door as Melissa was.”

This picture was taken in the restaurant area of the Jean Bonnet Tavern. Look carefully beside the second chair on the right. Can you see the outline of a figure captured by the camera? 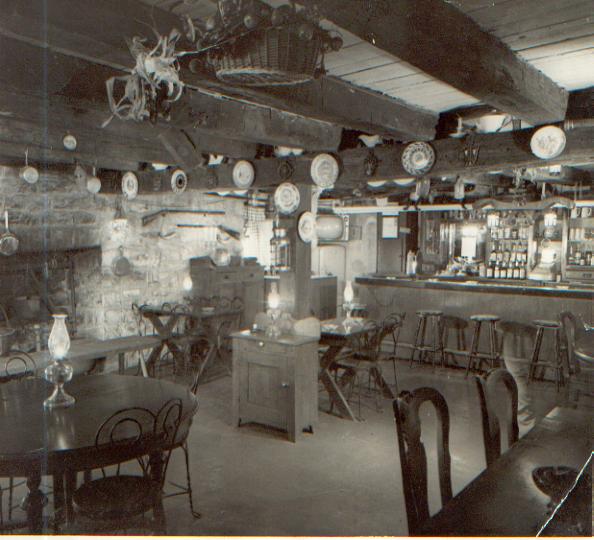 There are many stories of ghosts at the Jean Bonnet. Most people who experience a haunting come away fascinated and not frightened. The internet offers many accounts of haunted encounters at the Jean Bonnet. Click below for an interesting YouTube video, part of a series called Hometown Haunts produced by a Pennsylvania group called Mo Valley Paranormal.

“My wife had her glasses on the side of the bed. In the night she heard a noise and her glasses were in the middle of the room. Ghost? Maybe! We’ll be back!”  ….. D & D Gerazornio

When we came upstairs ...

“We had the knowledge of Melissa and her coworker having a “Waitress Olympics.”  The next day I awoke about 12:30 – 12:45 and could still hear them talking. I wanted to go down, but I didn’t want to intrude. The next morning I asked Melissa why did she stay up so late when they had an “Olympics?” Then she told me she had been home and in bed by 10:30. I love this place!”
….. T & B Price, Mount. Laurel, NJ

Well, we came here with the intentions of seeing some ghosts ...

but we just left with the satisfaction of a good night’s sleep and good hospitality! Thank you!”
….. Adam & Kate


Forelore or reality? Whether you are interested in ghosts or not, the Jean Bonnet is one restaurant and tavern that you really should visit!