If These Old Walls Could Talk: History of the Jean Bonnet

Destiny has granted The Jean Bonnet a long and interesting life.

The tavern, which dates to sometime around 1762,  was placed on the prestigious National Register of Historic Places in 1979. It is a great honor. We know George Washington and his troops passed here, as did countless settlers in wooden wagons heading to our nation’s great western territories. So too did thousands of travelers in new newfangled motor cars driving the Lincoln Highway, one of the first transcontinental roads in the United States.

Our building was originally intended to be a safe haven for early settlers and travelers. We continue our mission of hospitality to this day, as we welcome visitors with food, drink and comfortable lodging. Please come and visit us at the Jean Bonnet. Then you too will be part of the long list of famous and ordinary folk who have enjoyed our rich heritage, fine dining, and overnight accommodations. 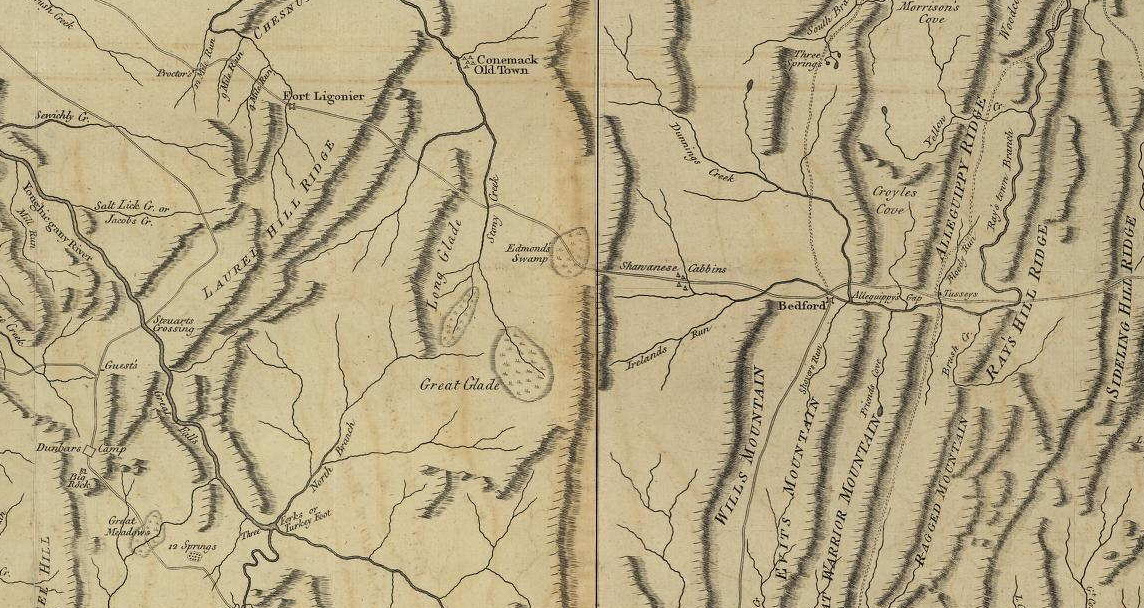 The Jean Bonnet was built at the junction of the Old Forbes Road (east -west) and Burd Road (north-south). Today this would be Routes 30 (Lincoln Highway) and Route 31.

There is little to prove the actual date of the building, but we know it served as an early French fort and trading post. In historic documents, mostly trapper and trader accounts, the building was referred to as being on the way to the Old Shawnese Cabins, that would be present day Shawnee State Park. We know General Forbes stopped here to await reinforcements before beginning a westward campaign in hopes of taking Fort Duquesne from the French.

The earliest official record of the property is noted in a transfer of title of 690 acres from an agent of the William Penn family to Hans Ireland, a land speculator. It was then transferred in 1762 to Robert Callender, an Indian trader. Callender was also a commissary for troop supplies, and later, a scout for General George Washington. This building, with its native stone walls, massive fireplaces, and chestnut beams, was built during Callender’s ownership.

Our namesake, Jean (John) Bonnet, and his wife purchased the property in 1779. In October 1780, Bonnet was issued a license, allowing that “Petitioner lives at the Fork of roads leading to Fort Pitt and the Glades with everything necessary for keeping Public House…”

Since 1780, ownership of the Jean Bonnet has changed hands many times. Most of those recorded as deedholders to the Jean Bonnet maintained the building as a public tavern and inn. Several utilized the property as a private residence. In 1957 the Jean Bonnet was purchased by the Enyeart family. It was during their ownership that stories of hauntings at the Jean Bonnet began to reach the public. 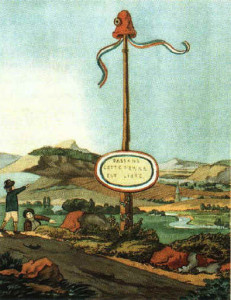 Liberty pole at the border to the Republic of Mainz, from watercolor by Johann Wolfgang von Goethe, 1793 (Image from Wikipedia.)

One of the most colorful moments in our history was when the tavern became a meeting place for the farmers involved in the Whiskey Rebellion. In mid-1794, Pennsylvania farmers were angry about the federal excise tax on whiskey. They gathered here at our stone tavern and raised a liberty pole in protest.

Liberty poles were popular forms of protest in colonial days. According to one on-line encyclopedia, the concept of a liberty pole actually began in Roman days around 44BC. After a group of senators assassinated Roman Dictator Julius Ceasar, they went to meet a crowd at the Roman Forum. There a pilieus (a kind of skullcap that identified a freed slave) was placed atop a tall pole to symbolize that the Roman people had been freed from the tyranny of Caesar.

Over time the concept of a hat atop a tall pole came to symbolize liberty from unjust oppression. Liberty poles were popular in the days leading up to the American Revolution. They would be put up in town squares and on private property, as at the Jean Bonnet. From time to time the poles would be knocked down by the King’s  soldiers. In Boston the liberty pole became a Liberty Tree.

A few years after the American Revolution, during the presidency of George Washington, Western Pennsylvania folks began putting up liberty poles to protest the new federal government’s tax on distilled spirits.

The so-called “whiskey tax” was the first tax imposed on a domestic product in the new United States. It was part of Alexander Hamilton’s plan  to to help pay down the huge national debt caused by expenses from the Revolutionary War.

Now taxes are never popular, but this “whisky tax’ was especially hated by farmers in our region. Farmers here would usually distill their surplus grain and corn into whiskey, and whiskey was sometimes traded in place of money. Taxing this was really irritating, especially given that some of these same farmers were veterans who had fought in the Revolutionary War.

But the new government needed the money, and  George Washington himself lead a large group of militiamen to quell the “Whiskey Rebellion. In October 1794, some of the troops he summoned camped here at the Jean Bonnet on their journey to Pittsburgh to quell the insurrection. 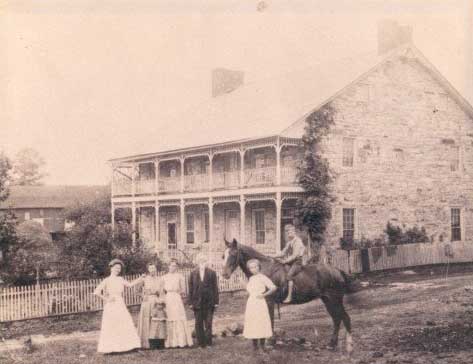 Above is an old photo of a group standing in front of the Jean Bonnet. The large bank barn in the distance is gone now, and the land has been leveled and contoured to make way for today’s parking lot and herb garden. Note the old building’s long ground level-porch and upper balcony. The bushes and vines are no longer there. Instead a large shade tree now graces the yard. This is the side of our building where today’s visitors enjoy outdoor dining. Photo below, from about the same angle, shows 2006 view just after the patio was constructed. 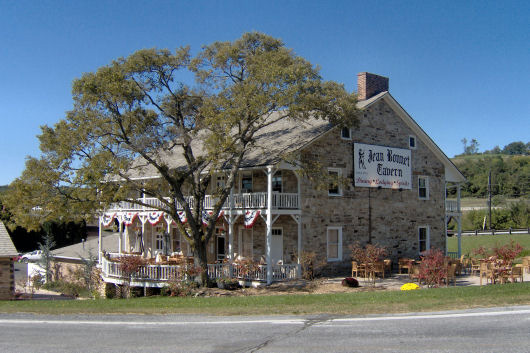 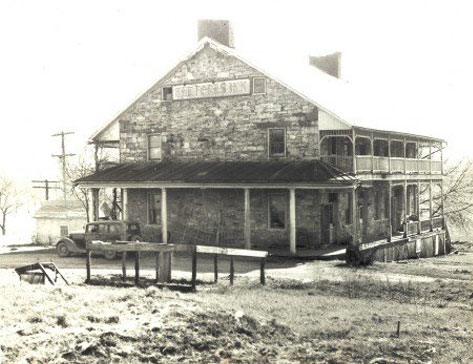 Photo below shows how this side of our building looks today with fence around the patio installed where the roofed porch once stood. 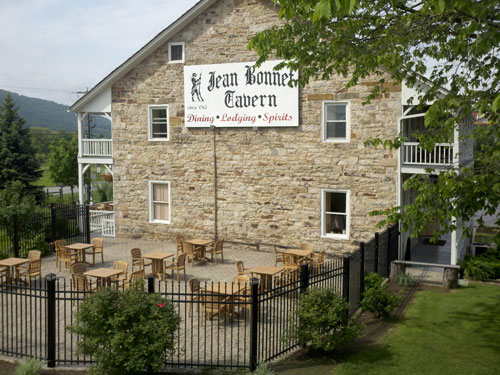